It’s hard to believe BenchPrep began life as a side hustle.

The company’s first test prep app was an instant success. It earned an “Editor’s Choice” nod from Apple, and BenchPrep broke even in a month.

On the heels of that success, co-founders Ashish Rangnekar and Ujjwal Gupta continued to produce apps profitably. But they soon realized creating and updating an app for every test and certification wasn’t scalable. So they tweaked the tech, making it so that users could download one app and purchase multiple test prep courses à la carte.

It was an improvement. And yet, the partners still found they were spending too much time marketing their product and not enough time fine-tuning it. That’s when they pivoted, embracing a B2B model to help test prep publishers engage their large audiences of learners. BenchPrep hit its stride.

“Reaching 30 students in a classroom is great, but how do you reach 30,000 or even three million?” said Rangnekar. “The best way to make an impact was to work with organizations that have the scale.”

Today, BenchPrep reaches three million learners and its platform is home to over 250 learning programs.

We sat down with Rangnekar and Gupta to learn more about how they went from students running a side hustle to leaders of one of Chicago’s fastest-growing elearning companies. 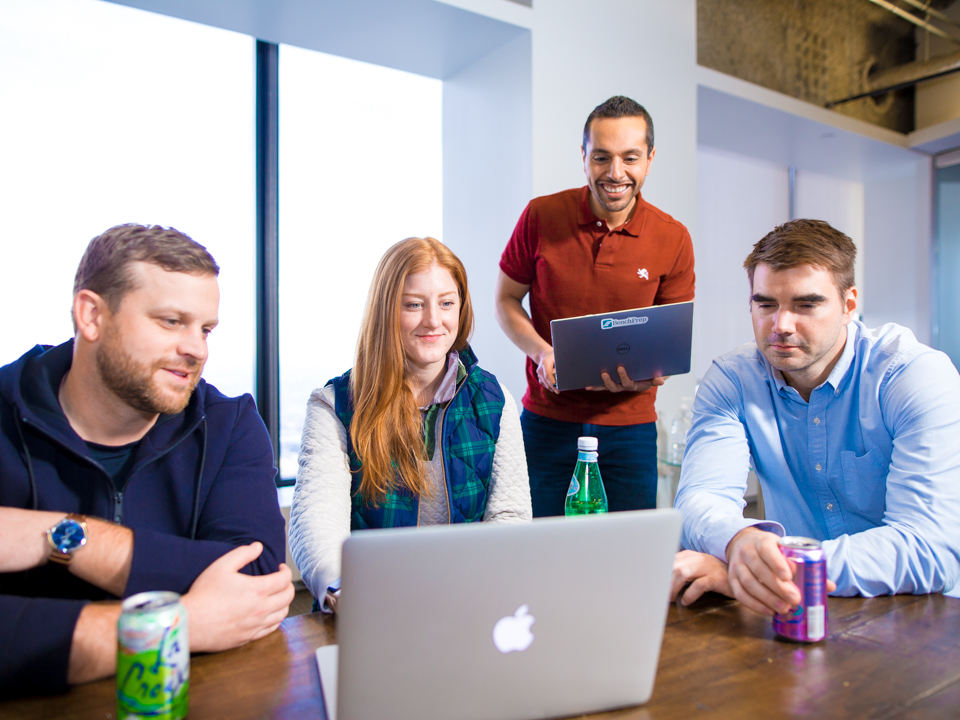 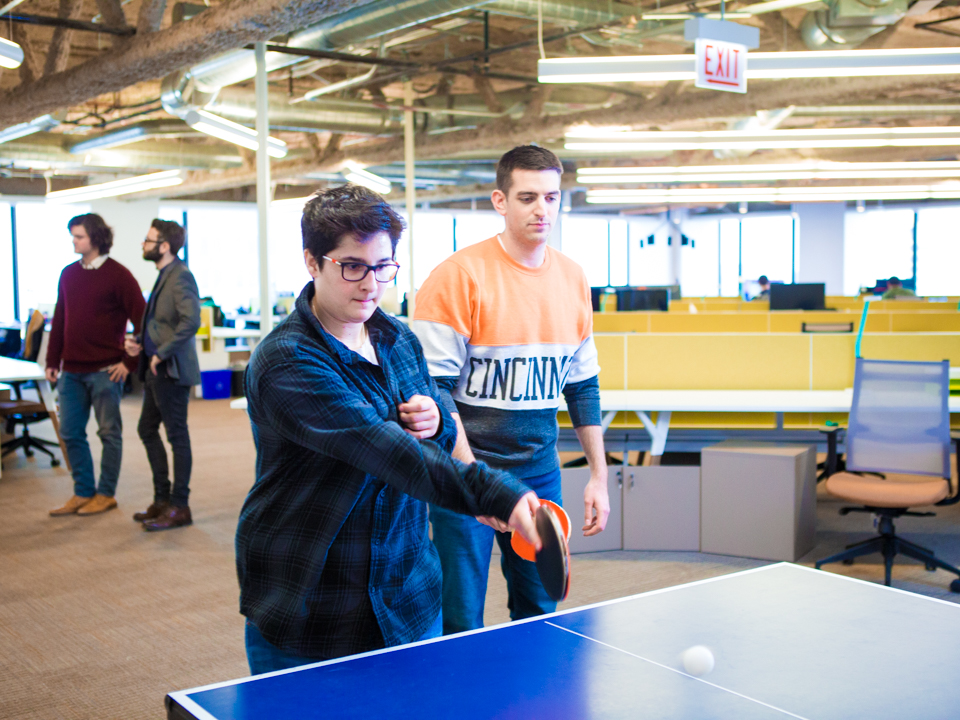 BenchPrep
View Profile
We are hiring

COMPANY LAUNCHED AS: A maker of test prep apps for people studying for everything from the MCAT to the LSAT.

WHERE THEY DO IT: The Loop.

MOVIN’ ON UP: The company recently moved to a 15,000-square-foot office in the Willis Tower.

THE LEADERBOARD: The company keeps track of ping pong wins and losses in a special Slack channel.

MEET AND GREET: Each new hire has one-on-one meetings with everyone in the office, which helps build relationships off the bat. 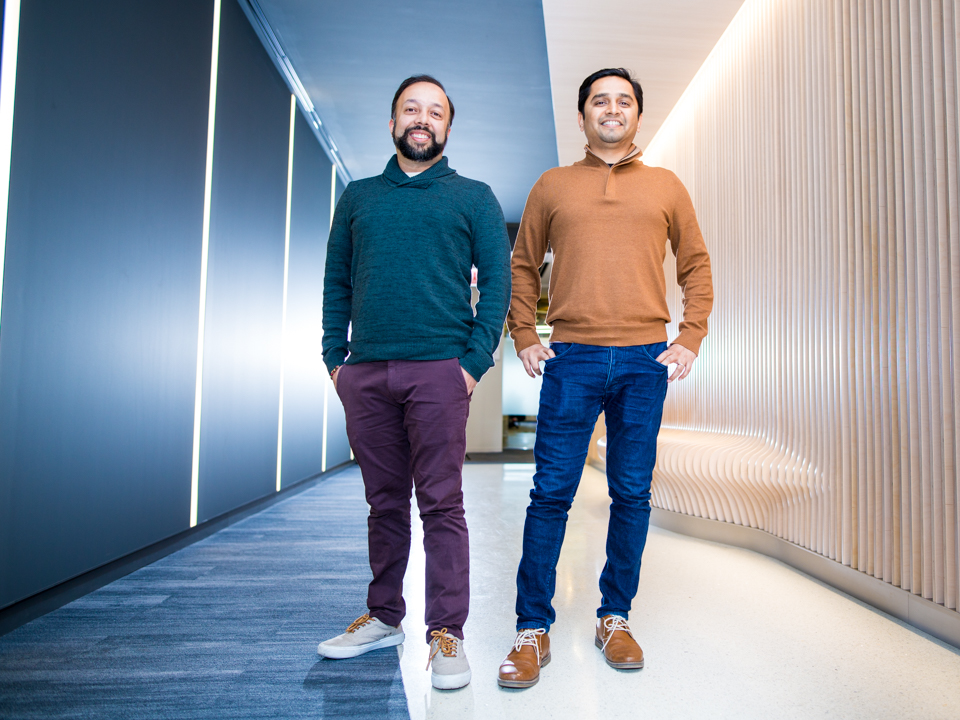 How did you two meet and decide to launch BenchPrep?

Ashish Rangnekar, CEO: We met in India while both of us were in undergrad. Afterward, I moved to the United States for a graduate program at City University of New York, where I was also an adjunct lecturer. Every day I sat on both sides of the table — as a student and teacher.

Fast forward six years: I’m lugging around heavy GMAT textbooks and studying wherever I can find a quiet space. I traveled a lot as well, which meant brining my textbooks onto planes because there weren’t any good digital options.

At the same time, Apple had just opened the iPhone platform to app developers. But there were no apps that addressed the problems I had as a student. I brainstormed with Ujjwal, who was teaching at the time as part of his PhD program, and we decided to build our own solution — a GMAT test prep app that could help on-the-go students study.

Ujjwal Gupta, COO: Ashish and I wrote the first 200 assessment units, or practice questions. We put it on the App Store for $9.99 and started making $300 a day.

Rangnekar: People from around the world were downloading it. We realized it wasn’t just us and our friends using the app, and that was the first real “aha” moment.

We realized it wasn’t just us and our friends using the app, and that was the first real ‘aha’ moment.”

When did you realize BenchPrep’s potential?

Rangnekar: We saw potential initially, but we didn’t just jump in. We scaled it up to 50 apps, with each one helping students study for a different test, like the SAT, GRE or LSAT. We were making money and profitable but it was still a side hustle.

Then in the summer of 2010 we won the University of Chicago’s Booth School of Business New Venture Challenge. That was another “aha” moment. After that, we closed our Series A with Light Bank. That was the point where we stopped looking at BenchPrep as a side hustle and started building a company.

Gupta: As we refined our product and started thinking about ways to scale sustainably, we realized it would be a nightmare to update 50 individual apps. So in 2011, we built the first kind of “ideas library” model, where there was one app and users bought multiple courses. 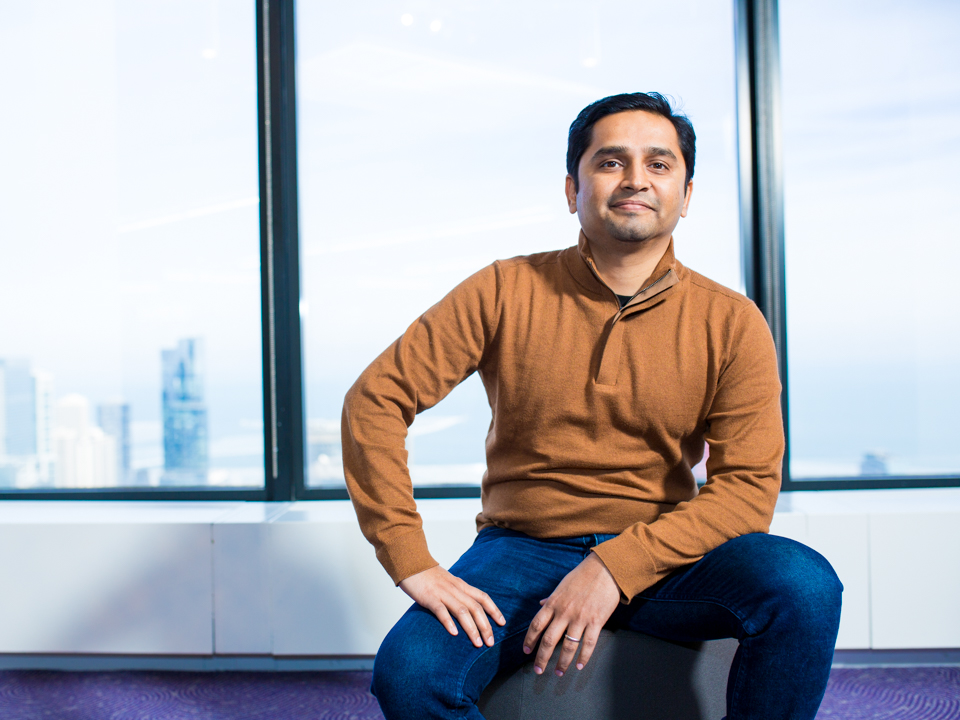 What helped drive your early growth?

Rangnekar: In 2013, we pivoted from a B2C to a B2B model and began selling directly to big education companies instead of students. That unlocked our true scalability and allowed us to sign marquee customers, like the ACT. It took a year to prove the efficacy of our new model.

Once we did, we were able to take our story to the market and sign up more customers. People were telling us they’d never seen anything like BenchPrep before.

People were telling us they’d never seen anything like BenchPrep before.”

Gupta: The problem with our B2C model was that, because each exam appeals to a different demographic, it was hard to keep up with the marketing. We always had that first mover’s advantage and an innovative product. Publishers would tell us, “You’re three years ahead of the industry.”

Pivoting gave us access to a captive and dedicated audience. We were able to focus less on marketing and more on our tech, which has always been our strength.

Rangnekar: The pivot allowed us to drive impact at scale. Organizations like McGraw Hill, ACT and the CFA Institute have the students but lack the tools to engage today’s learners. That’s where we come in. 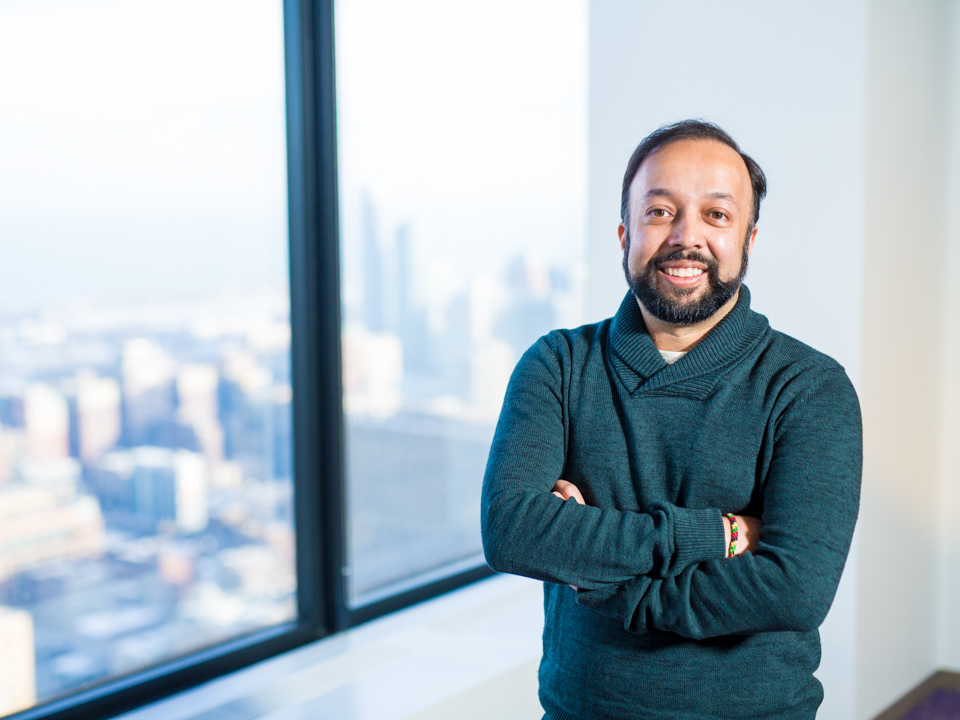 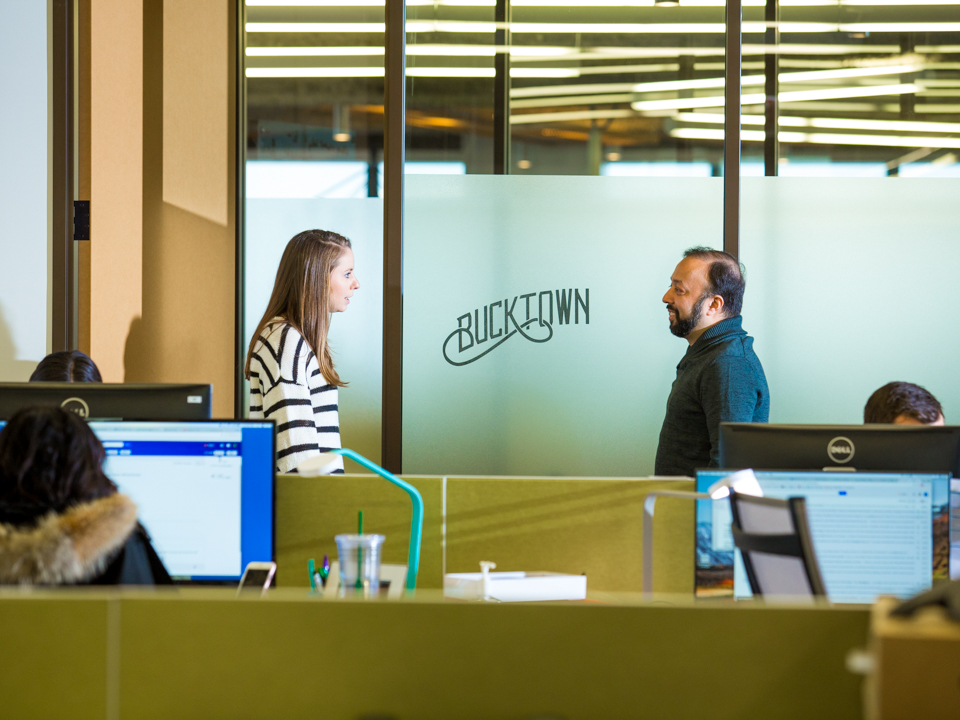 Were there any hurdles you had to overcome in the growth process?

Gupta: The biggest hurdle was helping education companies, many of which are massive and have a ton of history, understand what today’s learners need. When these companies built online tools, they based them on existing solutions like learning management systems. But learning management systems are built to manage in-class learning. They are not for self-study or mobile learning. One thing that helped us was sharing the use cases we gathered after the pivot. They proved our new model worked.

Rangnekar: Most of our customers produce books. But we’re not producing digital books — or lighter, prettier books. We’re changing the narrative and saying your customers don’t need or even like books. We’re more of a learning platform or a personalized learning experience.

We thought that if you made a phenomenal product, people would come, but that’s not how the industry works.”

As first-time founders, was there anything about scaling a business that surprised you?

Gupta: We thought that if you made a phenomenal product, people would come, but that’s not how the industry works. You have to be out there selling and marketing, and the product needs to have a good product market fit. Another thing that surprised us was the importance of having good people. Businesses are made by people, not products.

How have your leadership styles evolved as BenchPrep has grown?

Gupta: When we first started, I was very impatient. I wanted to see results immediately. It’s easier to estimate how long something will take when you do it yourself, but that’s different when you have a team. Everyone works differently. As we grew, I learned the value of patience and persistence. 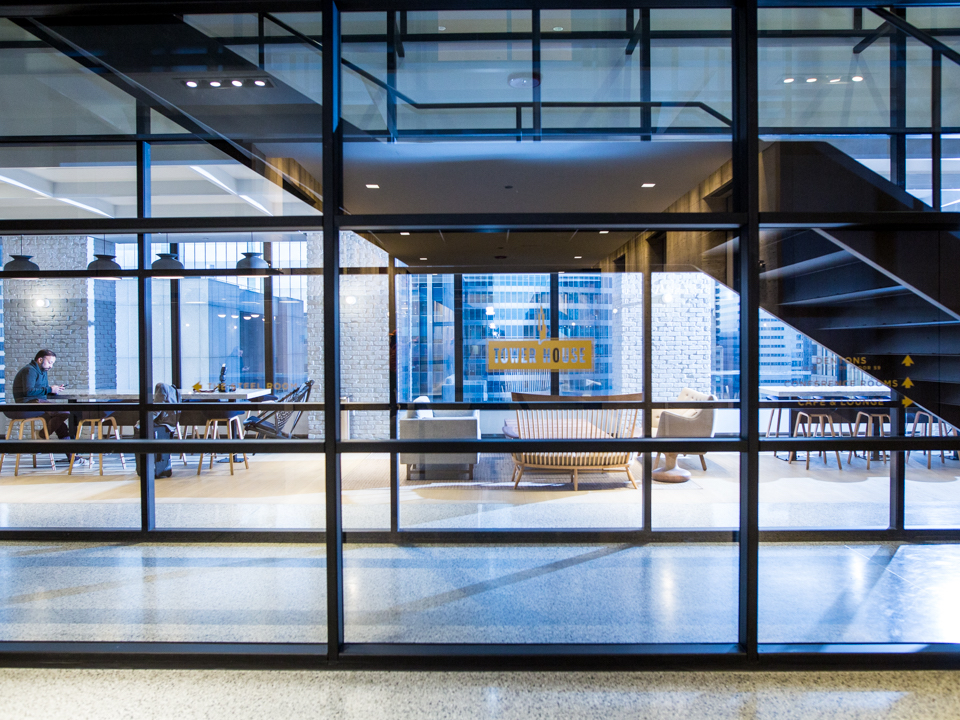 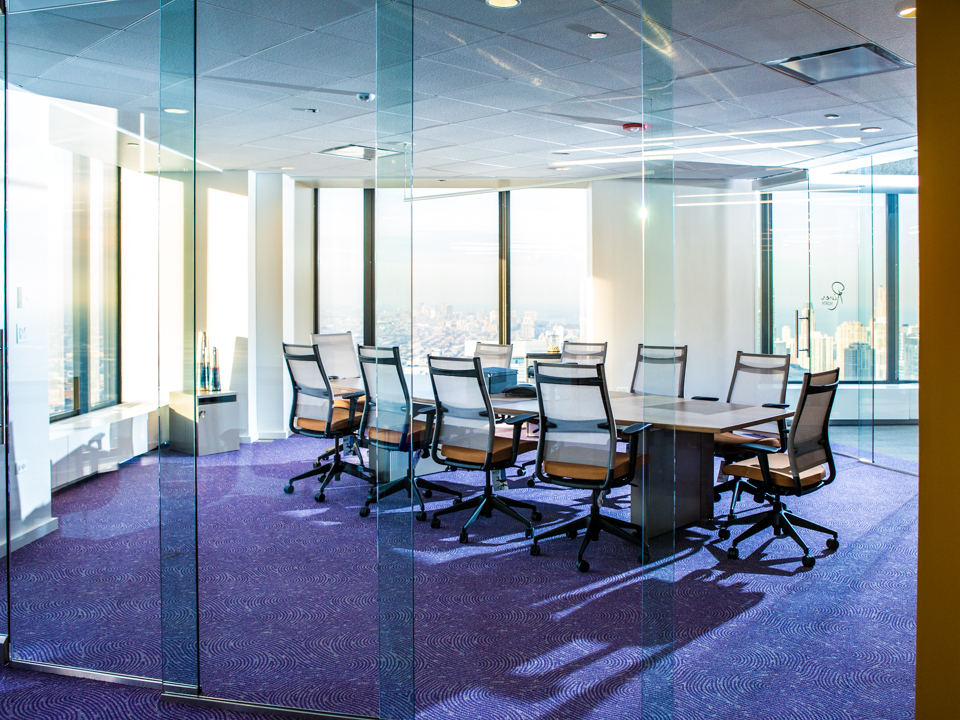 Gupta: Our entire product philosophy is about convenience, and that’s permeated into our culture. We’re in Willis Tower because it’s convenient for commuting. We offer lunch because we don’t want people to worry about what they’re going to eat for lunch. We provide a discounted membership to the building gym to make it easier to work out.

Happiness is another important part of our culture. It’s not the number of hours you spend working in the office, but the number of hours you’re productive. Keeping people happy means having a good work-life balance, not asking people to work long hours or on the weekend, providing benefits that actually make a difference and ensuring the office environment is stress-free. 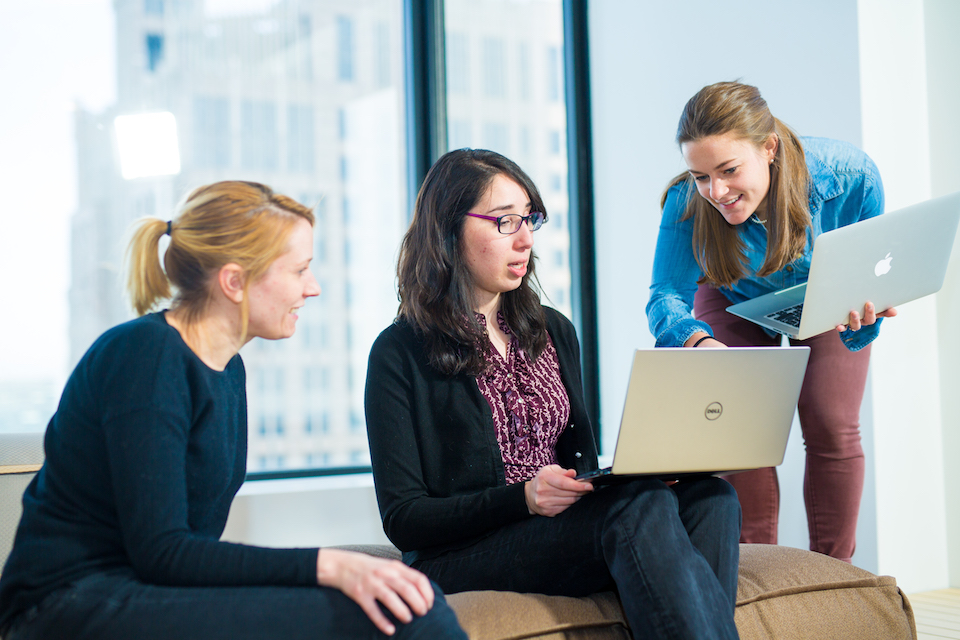 What makes someone a good culture fit?

Rangnekar: We want people who take pride in what they do. Our team is very diverse and inclusive, so we also look for people who are respectful of others. Finally, you should be proactive. This company is growing very fast, and for every one process we have, there are three we don’t. As such, you should be able to identify opportunities and act, not wait for instructions.

What are your goals moving forward?

Rangnekar: This will be the year where we start to see big results from all the work since the pivot. It's a true snowball effect. We expect significant growth in customer count, revenue and headcount. We’re about to truly take off.

The bigger goal is to start thinking about long-term sustainability. We want to put things in place today so that we have a line of sight to get to 600 people.